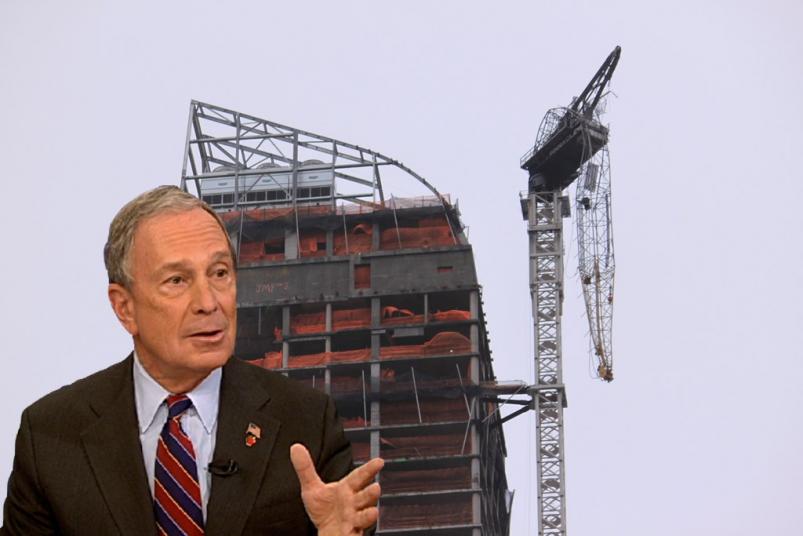 The crane at the luxury condominium project, One57 remains dangling from its 90th floor, but appears to be safe. The building, known as a magnet for billionaires around the world, has now caused broad evacuations and massive panic. It was called “The billionaires club” as its transaction volume surpassed $1 billion just within a few months and sold multiple apartments for $90 million.

It’s too early to say whether or not the incident will haunt One57’s reputation. Unfortunately, the removal of the crane appears to be a bigger problem than first anticipated.

Mayor Bloomberg said that the crane should be safe, but it will take some time to fix the problem. A new crane will have to be built in order to remove the broken one.

“Responding to press questions, we can confirm that LendLease took all recommended measures to position the crane in anticipation of a hurricane. This was inspected and approved by the Department of Buildings and is the standard for hurricanes.

LendLease together with members of the Extell construction team and with supervision and direction of the Fire Department, OEM, DOB, along with other city agencies, are planning a recovery procedure to secure the crane. As soon as the Fire Department deems it safe, that procedure will begin.

We apologize for the considerable inconvenience experienced by our neighbors, but safety is paramount. We are thankful that no one has been hurt.”

Other news of the day is Mayor Bloomberg’s surprising endorsement of Obama. Michael R. Bloomberg wrote that Obama has “taken major steps” to improve environmental issues like reduction of carbon consumption, higher fuel-efficiency standards and tighter controls on mercury emissions.

Nevertheless the Mayor stated that if the 1994 or 2003 version of Mitt Romney were running for president, he probably would give him the vote. However Governor Romney has changed his positions towards major topics which, Bloomberg wrote, disappointed him.

Mayor Bloomberg’s endorsement is seen as an important one as it may help influence independent and undecided voters. President Obama’s as well as Governor Romney’s campaign had aggressively sought the mayor’s endorsement.