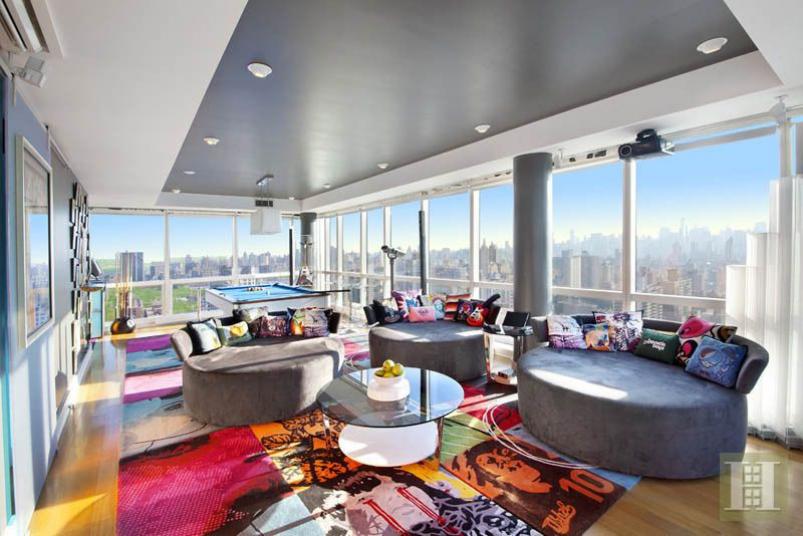 The most expensive sale of uptown (above 96th street) closed setting a record at $8.5 million. This four-bedroom, three-and-a-half-bathroom, penthouse is 38 stories above 2628 Broadway in Manhattan’s coveted Upper West Side. At 4,130 square-feet, this Ariel East condo is priced at $2,125 per square-foot.

Initially on the market back in January asking for $12.5 million, Jeff Grady purchased the condo in 2007 for $6.1 million. Grady, the inventor of the first iPod accessories, customized the entire duplex’s interior making it truly one of a kind. It features a unique collection of furniture inspired by Pop art and rock legends. Perhaps one the most memorable being the dining room table, each chair printed with famous Warhol portraits including Marilyn Monroe, Queen Elizabeth, Mao, and Jackie Kennedy. Sorry folks this, along with the chandelier, was not included in the sale!

According to Amelia Gerwitz (Executive Vice President of Halstead Property NYC), the lucky new owner (unidentified) now holds prized 360 views of the city including Central Park and the Cathedral of St. John the Divine. In addition to a pool, fireplace, and private wrap around terrace.

Ariel East, originally built in 1925, now has 37 floors and only 64 apartments. The Extell Development Company, nationally acclaimed residential developer, completed the project in 2007 along with a sister property, Ariel West. If you love these two buildings, be on the lookout for Gary Barnett’s under-construction super project “One57” located in Midtown on W. 57th Street.